The likeness Rod Serling made his Gaslamp Ball debut in May 2008, when the Padres actually starting hitting. It felt like the twilight zone. Axion posted the image of him with this to say:


Imagine a world, if you will

After the game, Axion fanshatted a picture of Rallyin' Rod complete with his Padres cap and pennant.[2] 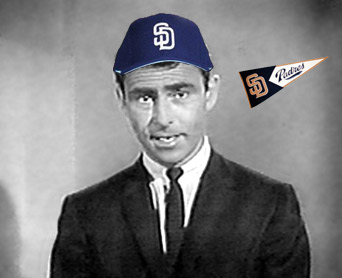 The Rallyin' Rod game is also remembered for being the one that Michael Barrett kissed Adrian Gonzalez on the cheek while he was being interviewed by Jenny Cavnar during the postgame show.[3]

Rallyin' Rod fell out of favor after a string of unsuccessful rally attempts, but he still lives on in our hearts and minds.