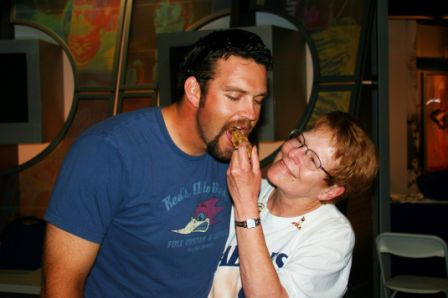 Heath Bell, aka "Heater" or "The Cartographer" is the former closer of the Padres. In addition to closing games, he would occasionally vent to ESPN about their perceived lack of interest in San Diego sports, and was determined to "put San Diego on the map". The nickname of "Cookie Monster" was also used in Heath's first couple years on the Padres after he was quoted as saying he loved cookies and people would deliver them to the bullpen.

Upon Bell's entry into games in a save situation, it was tradition in GLB Open Threads for someone to post the following bible quote (Ezekiel 25:17) that was said by Samuel L. Jackson's character Jules Winnfield in Pulp Fiction:

The path of the righteous man is beset on all sides by the iniquities of the selfish and the tyranny of evil men. Blessed is he, who in the name of charity and good will, shepherds the weak through the valley of darkness, for he is truly his brother's keeper and the finder of lost children. And I will strike down upon thee with great vengeance and furious anger those who would attempt to poison and destroy my brothers. And you will know my name is the Lord when I lay my vengeance upon thee.

Bell had expressed a strong desire to sign a multi-year extension for the San Diego discount. However, when Jed Hoyer selfishly left the Padres to spend more time with his man-crush, that deal never came to fruition and he signed a 3 year deal with the Miami Marlins